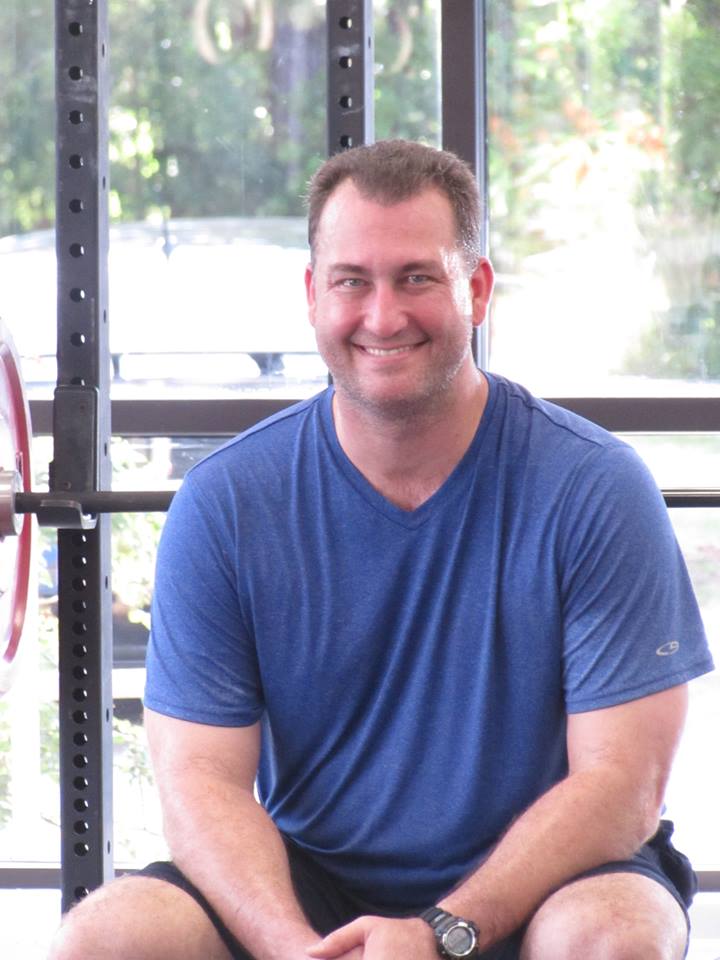 In 2014, I weighed 275 lbs. and couldn’t run more than a quarter mile at a stretch. Although I had the strength that came with being a naturally big guy, I had no stamina, no core strength and no capacity for cardio. I carried the weight well, but I was woefully out of shape, and I had been that way for a while. I played softball with the guys once a week in the spring and fall and that was the extent of my consistent physical activity. I snored like a freight train and had to use a C-PAP machine to get quality sleep. My triglycerides were through the roof and at 42 I was on cholesterol medication. High blood pressure?  Check. Back problems? You betcha.

I have my wife to thank for getting me into CrossFit – and CrossFit Tallahassee in particular. She started at the suggestion of a friend, and after a few months, I had to see what all the fuss was about.  I did my first workout on May 12, 2014 and it kicked my ass. I thought I was going to die or throw up – or both. But I kept going. I started seeing small gains. During the first year, my job prevented me from going consistently, but after I switched to a job that required less travel, I was able to make CrossFit a part of my daily routine. It still took three years before I was strong enough to do an unassisted strict pull-up.

Now, after almost four years of membership at CrossFit Tallahassee, I couldn’t imagine what my life would be like without it. Whenever I tell someone about it (because the first rule of CrossFit is that you always talk about CrossFit), I tell them that there are two main reasons why I CrossFit: the programming and the people.

The programming includes everything from the qualified, personable, professional coaches to the varied, scalable, difficult and effective workouts. If I belonged to a regular gym, there’s no way that I make myself do burpees. I’m just not going to do it. If you had to get this giant body down and then up again over and over, you wouldn’t either. But they’re good for me, like brussel sprouts. And I need those coaches to tell me that today I’m going to do burpees, or snatches, or wall-balls or 20 other movements that I may suck at because they’re really hard. The coaches at CrossFit Tallahassee are excellent, and I consider each of them a friend.

The people are the second reason I go to CrossFit Tallahassee. The community of this gym is special. It is welcoming and open. When someone new comes in for a workout, everyone makes an effort to introduce themselves and say hello. We know that we are about to share in some serious pain and suffering, so it’s better if you know the person next to you, in case you pass out and you need someone to break your fall (just kidding, that doesn’t happen). It’s also incredibly supportive. We celebrate victories together, like when someone gets their first bar muscle-up, or double-under, or has a baby or gets married. We encourage one another to keep trying, fight harder and do better than the last time, and if they don’t do better than last time, there’s always tomorrow. The people at CrossFit Tallahassee are what make the workouts fun.

So four years later – no more snoring. No more C-PAP machine. No more high blood pressure. No more cholesterol issues. 40 lbs. down. Ran my first 10K last month and have another one scheduled for next month. Doing a sprint triathlon in two weeks. I say all this because there might be someone out there who is in the same situation I was four years ago. Cliché, I know, but if I could do it, anyone can, but I couldn’t have done it on my own. I had the help of some great people along the way.